Barwa Bank, has announced the results of the Group for the year ended December 31, 2015, which showed a strong performance represented by a 18.3% growth in assets, thereby exceeding QAR 45 billion, driven by a strong growth in the finance portfolio, which reached QAR 28.5 billion at a growth rate of 22.6%, while customer deposits stood at QAR 25.5 billion at a growth rate of 16.5%. The Group recorded a net profit of QAR 729.7 million, with earnings per share (EPS) reaching QAR 2.46.
read more 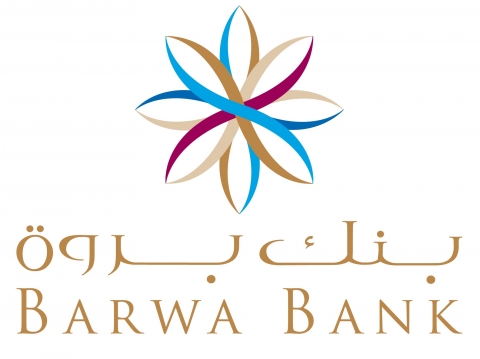 Anchored by its mission and values of putting the community first and being an active player in the economic development of Qatar and the well-being of its people, Barwa Bank, Qatar’s most progressive Shari’ah-compliant financial services provider, will be the Main Sponsor of the 32nd GCC Traffic Week, the region’s premier annual traffic safety and awareness event. 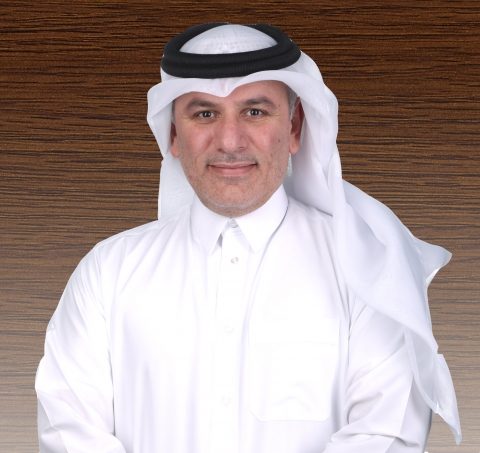 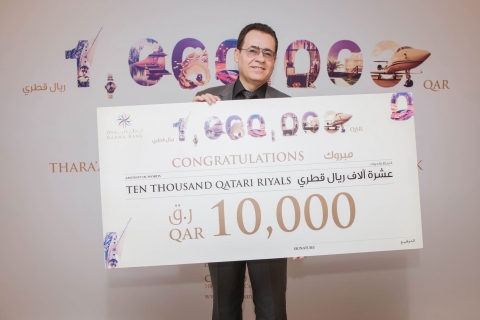 Barwa Bank, Qatar's most progressive Shari’ah compliant service provider, announced the names of the fifth round of draw winners for Thara’a, its Shari’ah compliant savings account, at the Bank’s headquarters. As such, Mr. Ahmad Hussin Mohammad Aboshaar, Mr. Abdulrahman Abdulsamad A A Al-Mulla, Mr. Alawi Abdulkadir Aljuneid, and Ms. Ameera Abdelaziz Omer Elhusain, each won a cash prize of QR 10,000. 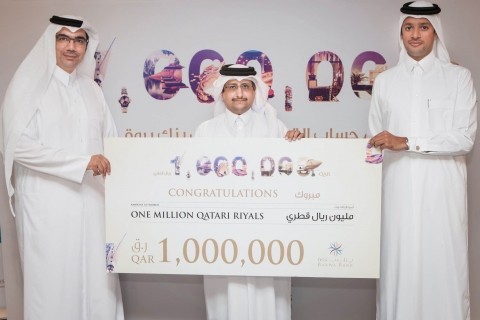 Doha, Qatar – 18 January 2016 – Barwa Bank, Qatar's most progressive Shari’ah compliant service provider, announced the fourth round of draw winners for Thara’a, its Shari’ah compliant savings account. Capping the 2015 series of draws with a dual reward for Thara’a account holders, the draw doubled up the chance for two participants to walk away with the 1 million riyal grand prize. As such, Mr. Salem Said Al Merri and Mr. Alla Hail Marouf each took home QAR 1 million.

The First Investor recognized by the 2015 IAIR Awards 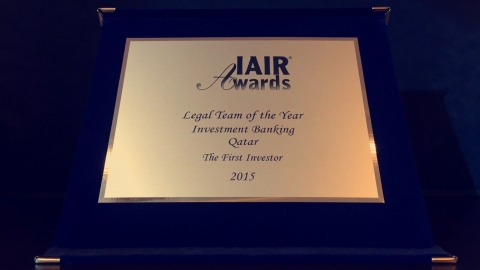 The First Investor (TFI), the investment banking division of the Barwa Bank Group, was recognized at the IAIR Awards 2015 for its legal expertise and excellence.

Barwa Bank, Qatar's newest sharia'h compliant banking service provider, was invited to showcase the details and unique features of its new concept branch that was announced to customers in Qatar earlier last month.

The invitation came from Parma University in Italy where Mr. Hussain Fakhri, Head of Marketing Communications, Barwa Bank addressed the students of masters program in Retail Banking, and explained to them the vision and concept behind the branch.

Barwa Bank, the newest financial services provider in Qatar and Qatar Development Bank (QDB), yesterday signed an agreement that enables Barwa Bank to provide its customers with the benefits of “Al Dhameen”, a loan assurance program for Small and Medium Enterprises (SMEs) in Qatar. 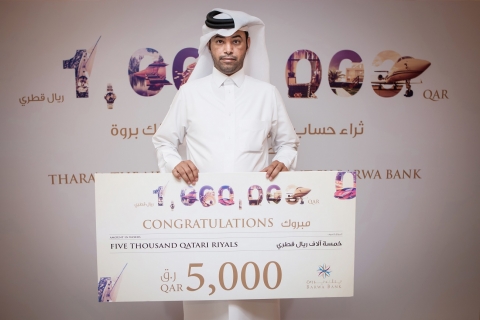 BARWA BANK SPONSORS “THE JOURNEY TO THE DEPTHS ” DOCUMENTARY

Barwa Bank, Qatar's most progressive Shari’ah compliant service provider, has announced its sponsorship of “The Journey to the depths”, a documentary that recounts young hero Ghanem Mohammed Al Muftah’s diving experience as he overcomes a rare physical ailment with determination. The sponsorship falls under the bank’s larger CSR framework, which supports various initiatives that pour into national development, and honors individuals with special needs who have made a positive impact on their societies.

In its deep-rooted commitment to local heritage and culture, Barwa Bank, Qatar’s most progressive Shari’ah compliant service provider, celebrated the Qatar National Day with the launch of a limited edition credit card. 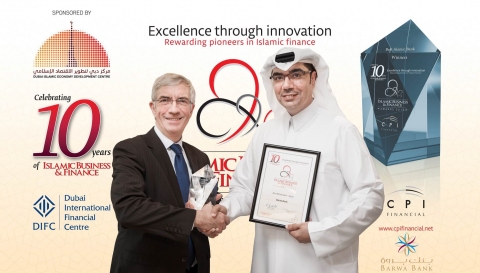 In a ceremony held at its headquarters in Doha on January 24,  Barwa Bank, Qatar's most progressive Shari’ah compliant service provider, celebrated its recognition by CPI financial as “Best Retail Bank for 2015”.

CPI Financial, the well-reputed publisher of Banker Middle East, has recognised Barwa Bank for leading on innovation in retail banking products and services that delivered on exceptional financial results and an unmatched customer experience. CPI awards are based on a peer-vote process that reflects industry-wide recognition for winners.

In a first for Qatar’s Islamic banks, Thara’a offers account holders the chance to benefit from cash rewards up to 1,000,000 QAR, seamlessly reconciling core values of Islamic finance and Shari’ah compliant banking with a tiered reward-based loyalty scheme for personal banking customers.

Barwa Bank, Qatar’s most progressive Shari’ah compliant services provider, has announced the promotion of Talal Ahmad Al Khaja to the role of Chief Communications officer. In this newly expanded role, Al Khaja will be tasked with overseeing the bank’s marketing and communications, as well as public and shareholder relations in line with the bank’s evolution and development.

Barwa Bank convened its Annual General Meeting (AGM) on the 31st of May, at which the results and budgets, as well as a cash dividend of 10 percent to shareholders for the fiscal year ending on December 31, 2014, were unveiled and approved. The AGM also discussed the bank’s vision going forward, highlighting the role of Sukuk and bond issuance in its record growth.

Opening the ceremony, the bank’s Chairman and Managing Director, H.E. Sheikh Mohamad bin Hamad bin Jassim Al Thani , welcomed the Barwa Bank Group Board of Directors, the management team and  staff members, commenting on how the Group’s successes would not have been possible without the hard work of the talented individuals within the Group:

On the heels of a record performance marking the fiscal year 2014, Barwa Bank, Qatar’s most progressive Shari’ah compliant service provider, capped the first quarter of 2015 with equally remarkable results.

BARWA BANK AWARDED BY EUROMONEY FOR INNOVATION IN ISLAMIC FINANCE

Barwa Bank, Qatar’s most progressive Shari’ah compliant service provider, has been recognized by the Euromoney Awards for Innovation in Islamic Finance 2015 for its lead role in international Sukuk issuance. Against a number of criteria across key metrics including innovation, cross border presence and industry growth contribution, Barwa Bank won two awards for Her Majesty’s Treasury GBP 200 million UK Sovereign Sukuk, as well as for the International Finance Facility for Immunisation Company/GAVI $ 500 million Sukuk.

At the Corporate Counsel Middle East Awards 2015, Allen Y. Merhej, Executive Director and Head of Legal at The First Investor, the investment banking arm of Barwa Bank Group , was recognized as  the “Highly Commended’’ General Counsel of The Year.

Barwa Bank, Qatar’s most progressive Shari’ah compliant banking service provider, has announced the launch of its summer spend campaign for Visa cardholders, rewarding customers’ retail purchases with extra loyalty points and the chance to go on a fully paid holiday to Milan for four.

The Board of Directors recommends a 10 percent cash dividend

Each year, the STP Awards are presented to a few select banks that meet very strict selection criteria and transaction monitoring mechanisms. Barwa Bank’s award was handed in recognition of its outstanding levels of automation in USD payment platform.

The two-day conference discussed significant topics such as the challenge of globalising Islamic capital flows, the Islamic financial institution strategy in the UK and Europe, financing European infrastructure with Shariah-compliant capital, amongst others.

Ms. Anoud Al Rajab, Barwa Bank's Al Sadd Branch Manager, accepted the awards on behalf of the bank at the ceremony that was held at The Address Downtown, Dubai.

Mr. Khalid Mahdi Al-Ahbabi, Executive General Manager and Chief Business Officer of Barwa Bank, accepted the awards on behalf of the bank at the ceremony that was held at the Jumeirah Emirates Hotel in Dubai.

In a statement, Barwa Bank said:

Media Center | Careers | Investor Relations | Contact Us | About Us